A little something outside-the-box for our followers, but a heartwarming story in keeping with our “small town love”. Hope you enjoy.

With a warm spring finally here and hotter weather to follow, a store near me has filled its seasonal section with all things summer. Though still April, I saw stacks of Fourth of July themed party supplies, plastic cups for poolside use, and a display of various sunscreens. It was the sunscreen display that reminded me of a day trip I took years ago with my kids.

The three of us set off to spend a day on the beach of a small town I’ve visited all my life and I knew the kids would enjoy sun, sand, and saltwater. As for me, I immediately felt calmer simply leaving work, traffic, and fast-paced living. While the kids argued in the back over who would be first to get in the water once we arrived, I drove and looked forward to experiencing again the small town ways I love but see disappearing. It’s hard to describe those ways, but…

There are a few little odds and ends to be attended to, but we are essentially finished with the house! The gas logs and grills were delivered and installed. Love, love, love those logs!

Those shed doors that were under construction on the driveway in the last post are now in place. We used that same opaque stain that is on the screened porch. These suckers are heavy! It took three guys to lift and put them in place and those hinges were made to hold lots of weight.

Here is the path created out of  the stones the neighbor had taken up.

A shot of the kitchen with those drawer pulls finally in place. There are still some final touches needed on the cabinets.

Coincidentally, this article was in the October issue of Southern Living. Where I am from in north Florida, we call these pretty things “Hurricane Lilies” because they bloom in hurricane season.

My sweet sister-in-law, Carol Gornto, remembers how much both my parents loved the hurricane lilies and searched a few bulbs out for me to put at the new house. In fact, there are some that come up each year at the family cemetery plot where Mama and Daddy are laid to rest. 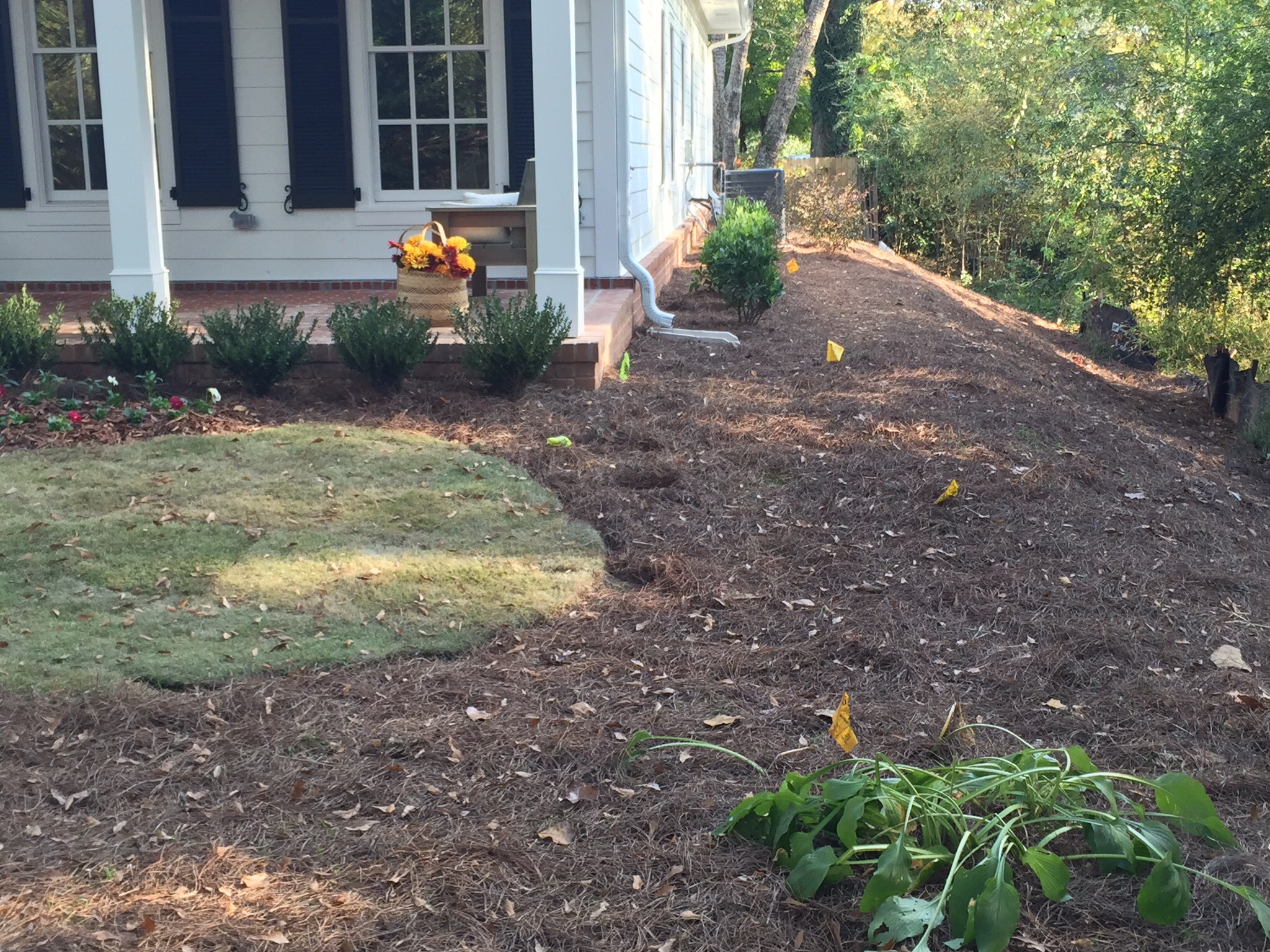 We have left most of the front yard a natural woodland area and I chose this spot for my bulbs. Needless to say, I will think of my parents when they come up.

James had dinner with us on the night of our 40th anniversary and Buddy broke in the new gas grill with some tasty steaks. 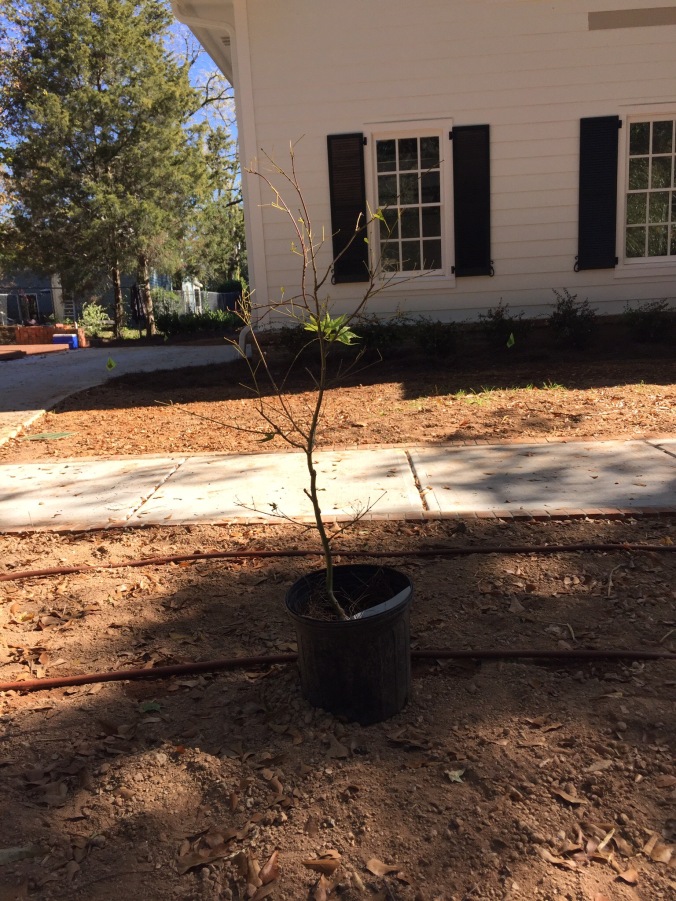 This is the spot chosen for the Japanese Maple.

Sod day was pretty exciting! What a difference it made. 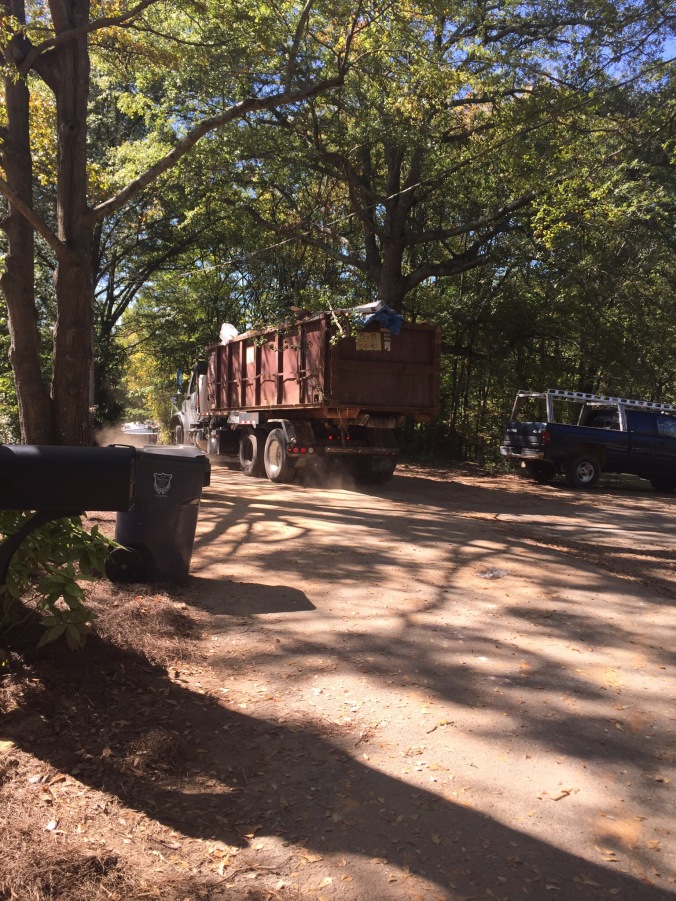 Farewell to another old friend.

A few limbs were trimmed that were hanging too close to the house.

Buddy built this bench a few years ago from some cypress that my brother stumbled upon. The annual beds are pansies and snapdragons. I’ve never had snapdragons before and I’m looking forward to having them bloom.

Our son, Will and his family, Dori, Beau and Paige have graciously “fostered” our sweet Ebony while we were apartment dwellers and getting settled in.  She has just come home and is busy exploring and sniffing.  Here we’re taking her on her first walk. 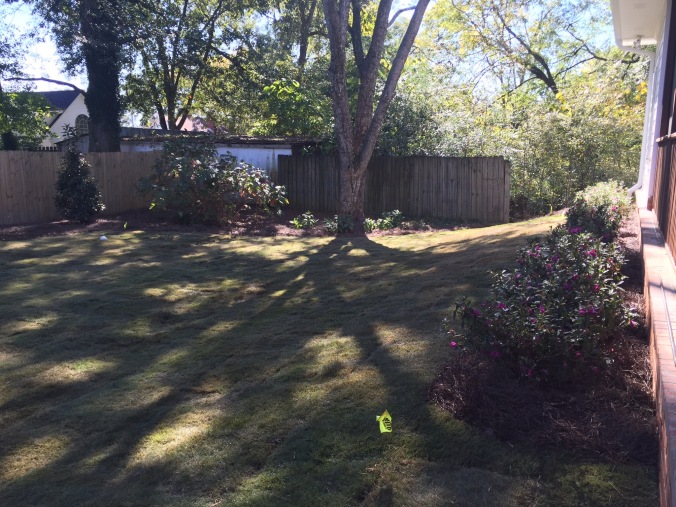 A couple of shots of the back. 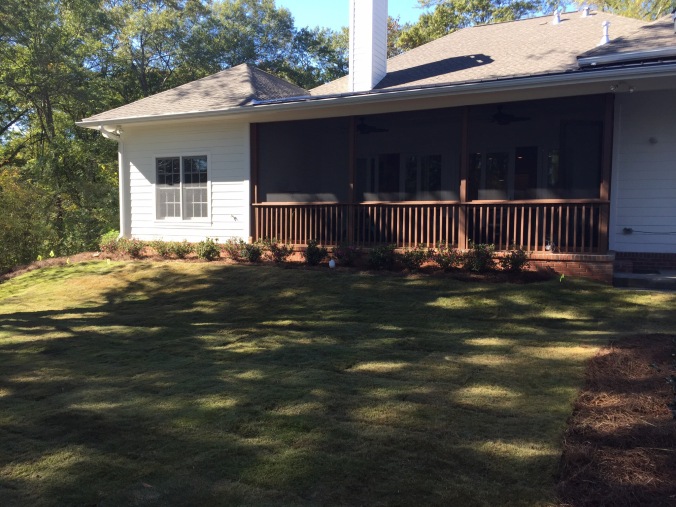 May all who step on this porch feel welcome and that they are entering a home full of love. 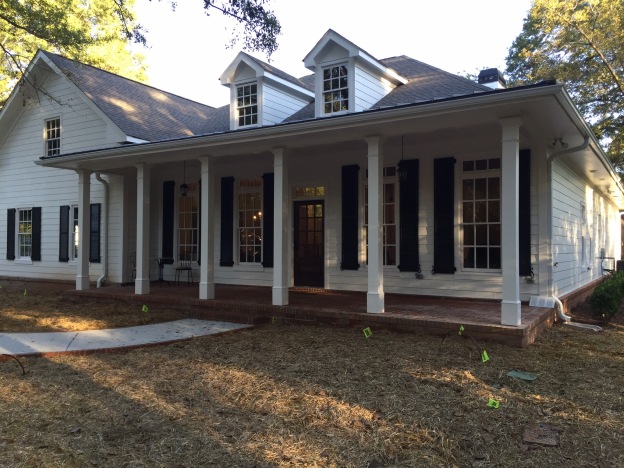 Now, that by no means indicates that the house is done, but it is close!  We’ve spent 6 nights here, during the day co-existing with workers.  We came so far in the two weeks from the last post to moving day.  It is just unbelievable!  To hit some high points with a few photos:  This is the tile in the guest bath.

Finishing up the screened porch really made a difference in the look of the back. We decided to go with an opaque stain on the framing.

A huge issue has been the amount of rain.  Week before last we had one good day and the landscape crew was able to clean out that corner in the back yard.  Buried in there were old, mature oak leaf hydrangeas, and the buckets you see against the neighbor’s shed were hostas that we’re going to reuse in the front.

A nice crepe myrtle was saved…. 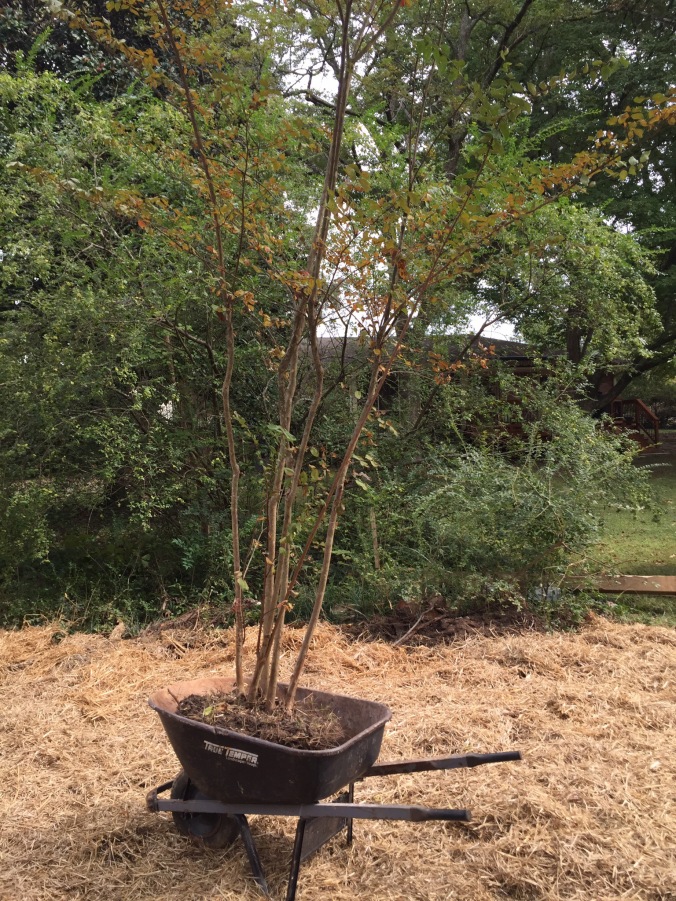 and here it is in its new home left of the driveway. 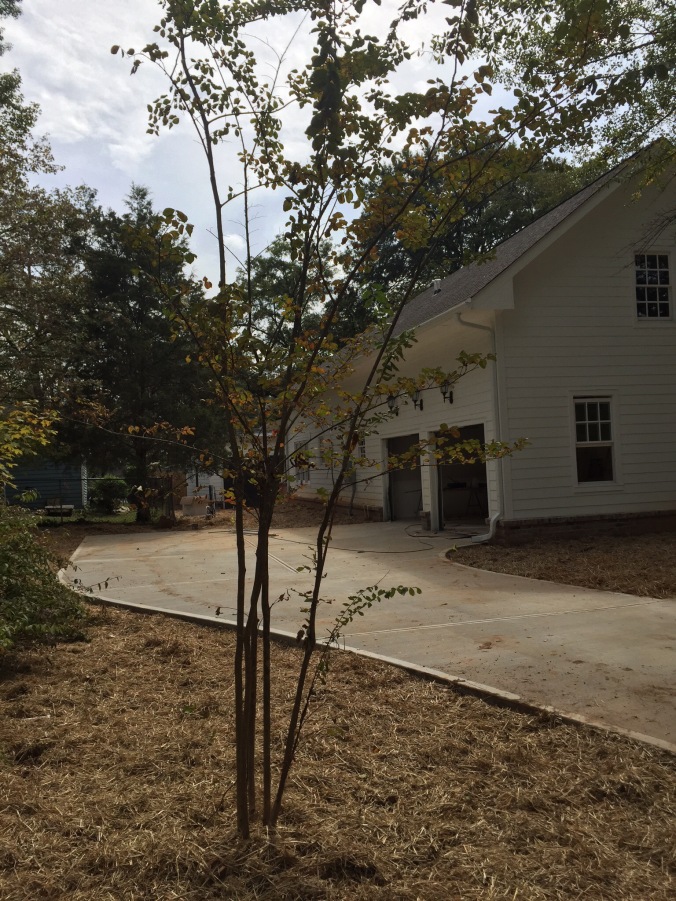 And the rains returned.  This was pretty depressing. 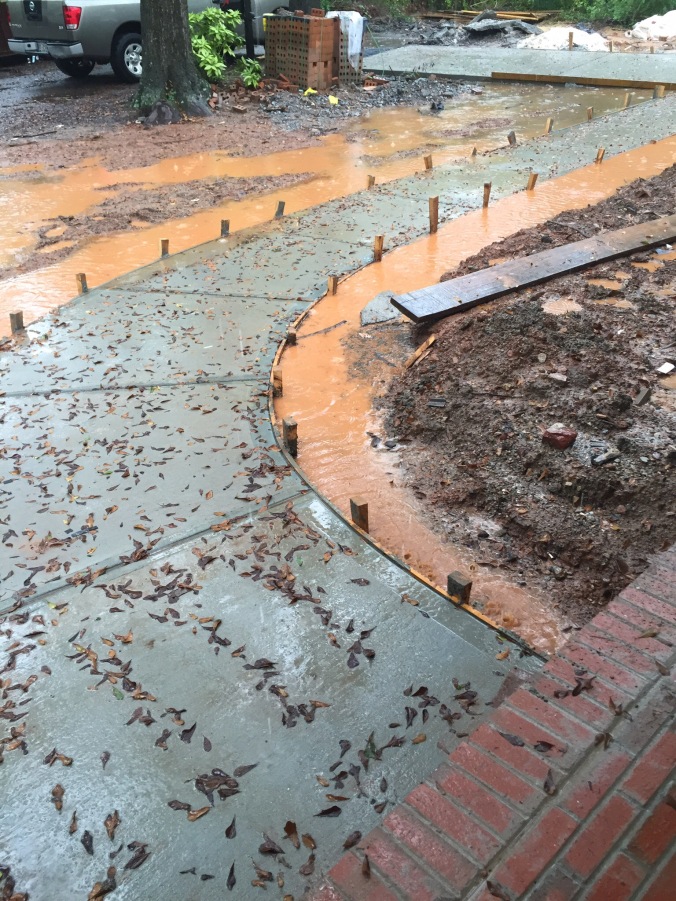 And I decided to do a little off-roading out front.  Josh and Randy, with Centurion, came to my rescue. 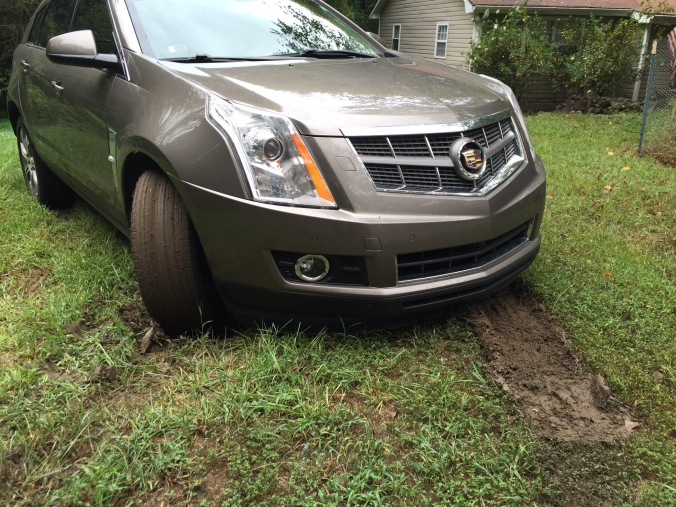 Our granddaughter, Paige, came to be my assistant one day and she brought her class pet, Camo.  Stephan asked Paige if she would like to move some bricks, but she wasn’t real high on the idea.

We have tried to be conservation-minded whenever possible. These cabinets were saved from the old house and are installed here in the laundry room.

This granite is what we used in the kitchen. There was enough to to cut a piece for the laundry room out of what we had.

Buddy had the idea to “mark” the driveway. Our three grandchildren, Beau, Paige and Emily we hope will be able look back one day on lots of happy memories made here. 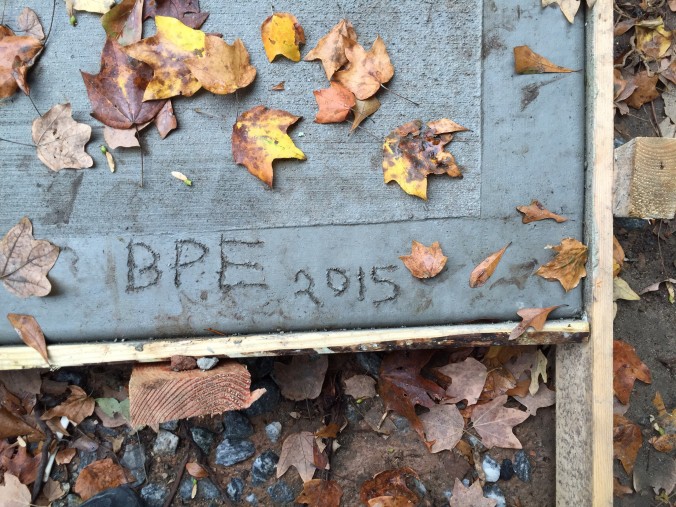 The metal roof finally gets installed over the porches. 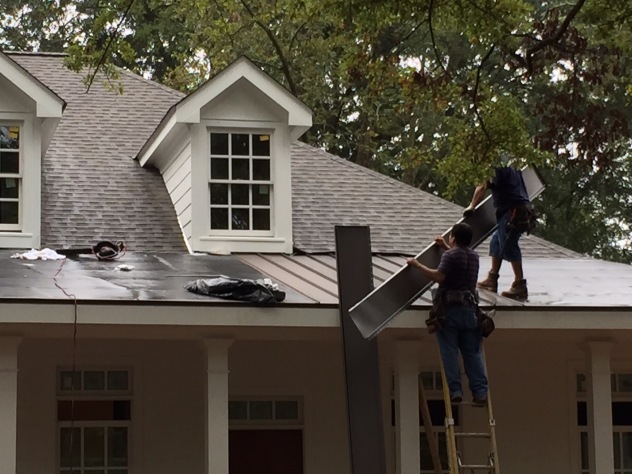 I was a little worried that this “glacier granite” was going to be too blingy on the fireplace.  Up close it was quite glittery. But, once in place I loved it. 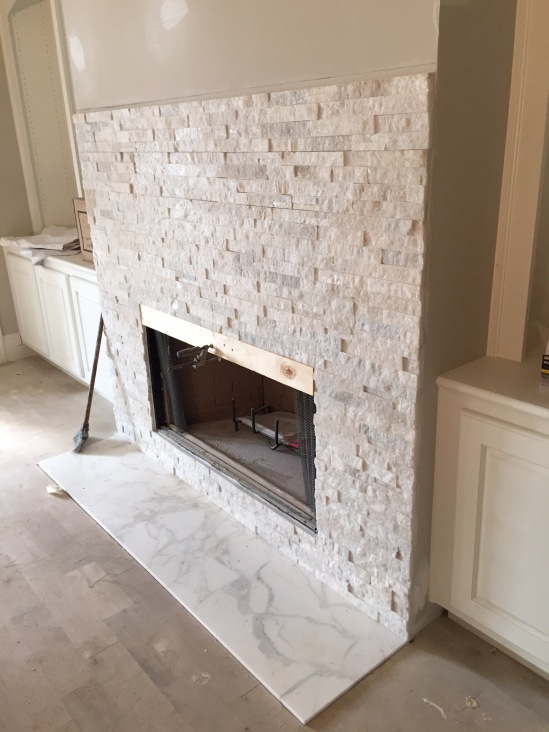 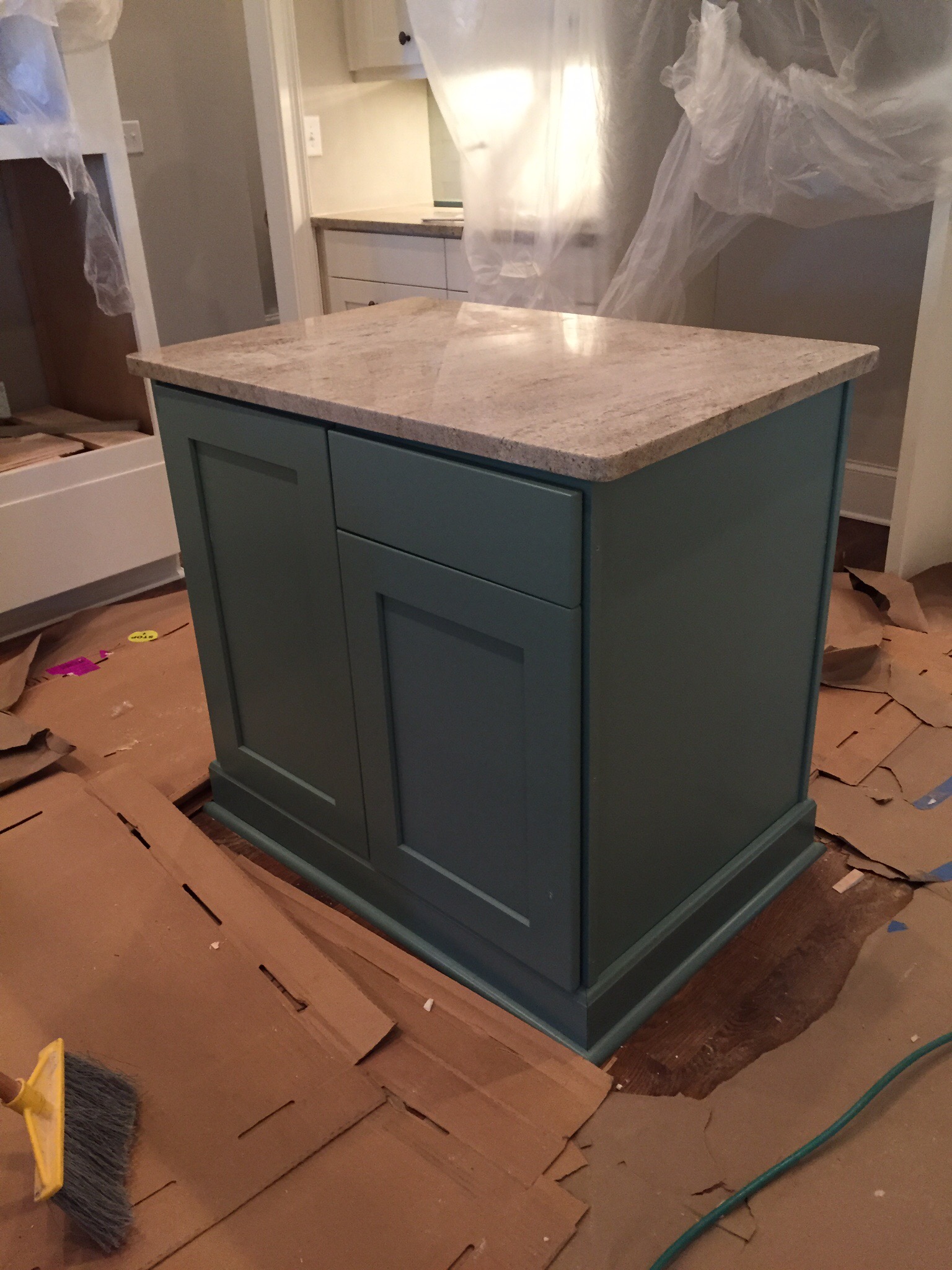 The little kitchen island in its custom color came in just a couple of days before move in day. It is pretty, though. 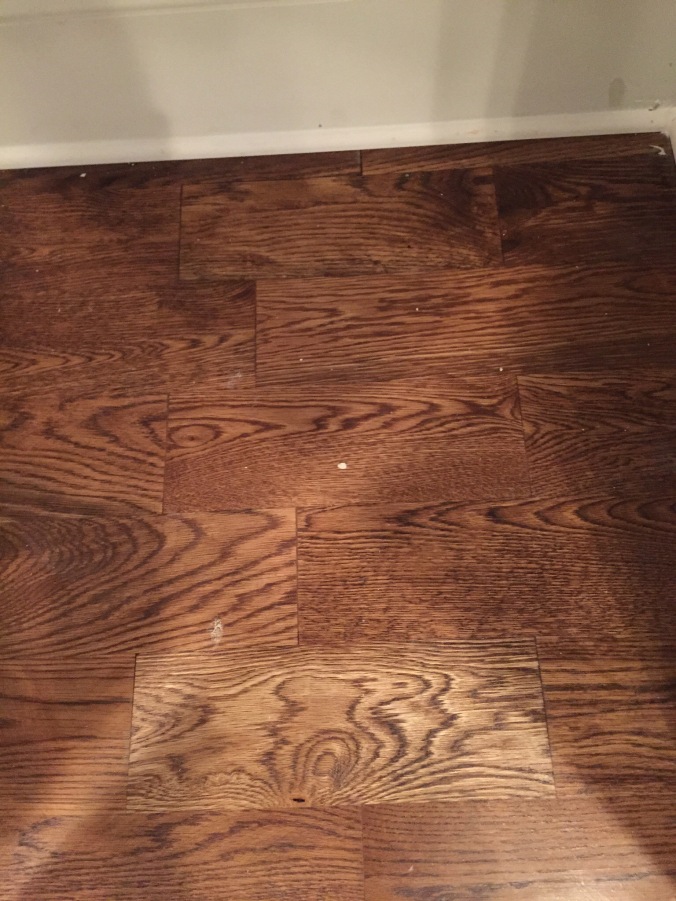 The finishing of the hardwoods was completed at the 23rd hour literally. I think the guys worked until about 11pm two nights to get them done. The stain is Provincial on white oak. 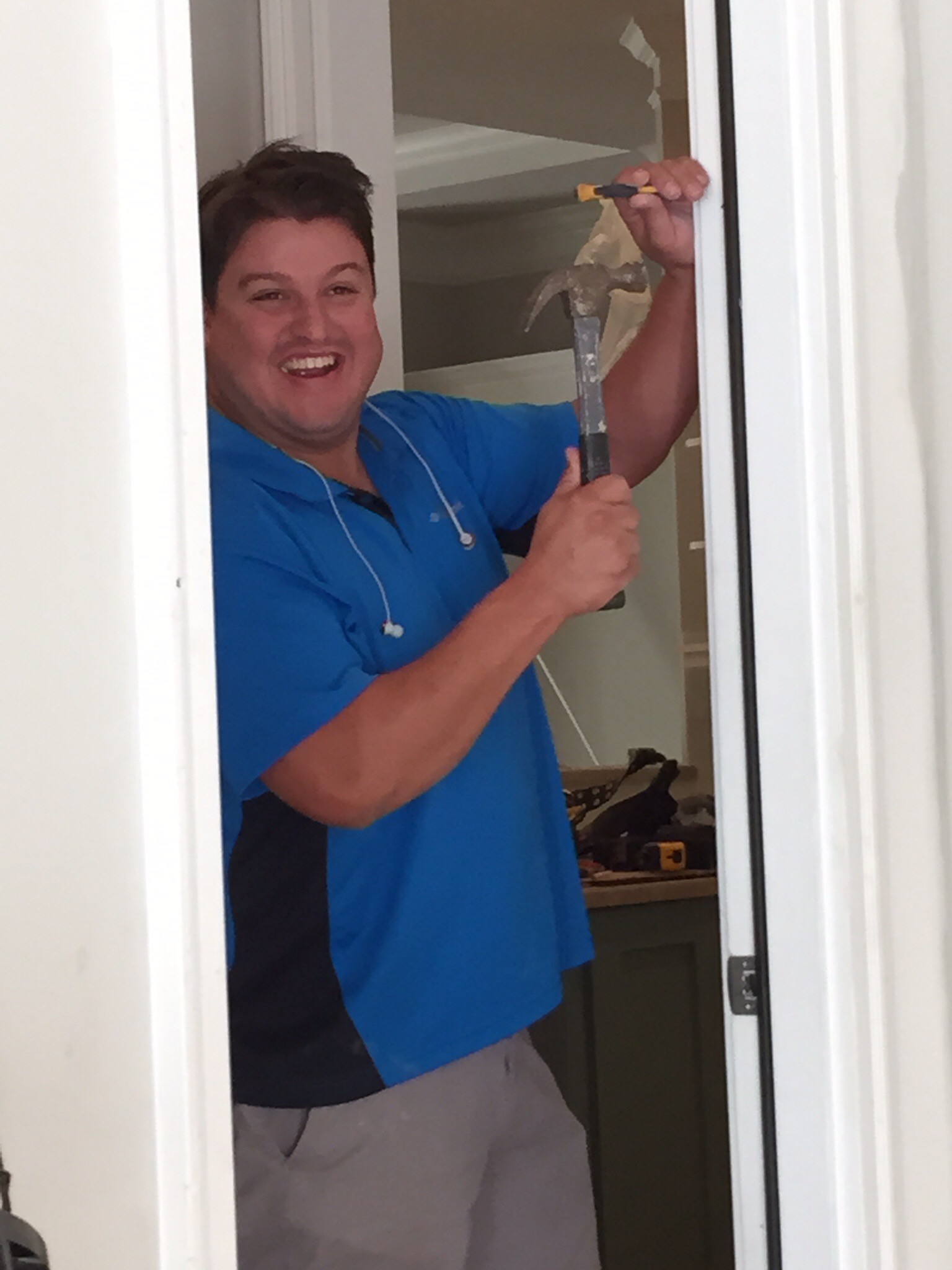 Even our contractor, Louis Tapia, of Centurion Home Improvements got into the act when it was crunch time.

The concrete counter on the grill station turned out really nice. They used the same stain on it that was used on the screened porch floor.

I waited as patiently as I could to see those great sliding doors without the film on the glass. This was an exciting moment for me. I did before and after pictures. Wow! 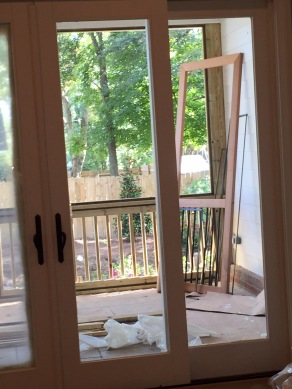 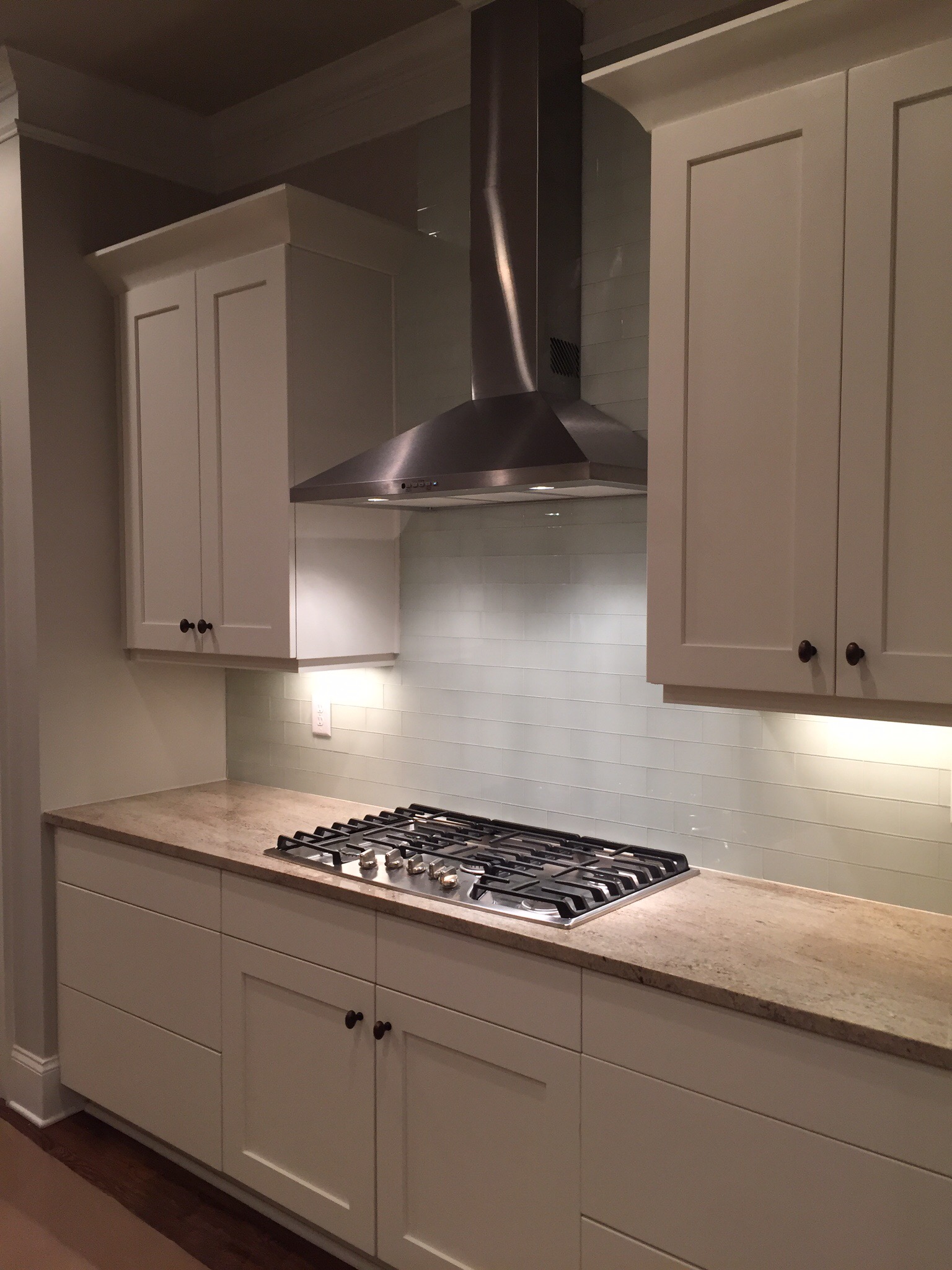 The kitchen isn’t huge, but I think it will be really functional. The cooktop wall really turned out to be a nice focal point. The cup hook drawer pulls went on the day we moved in. Talk about cutting it close!

Cheers! We got our C.O. At 3:30 on Friday afternoon and the movers were scheduled to arrive at 9:00 Saturday morning. Nothing like toasting the new house with solo cups, sac-o-chairs and a step ladder for a coffee table. 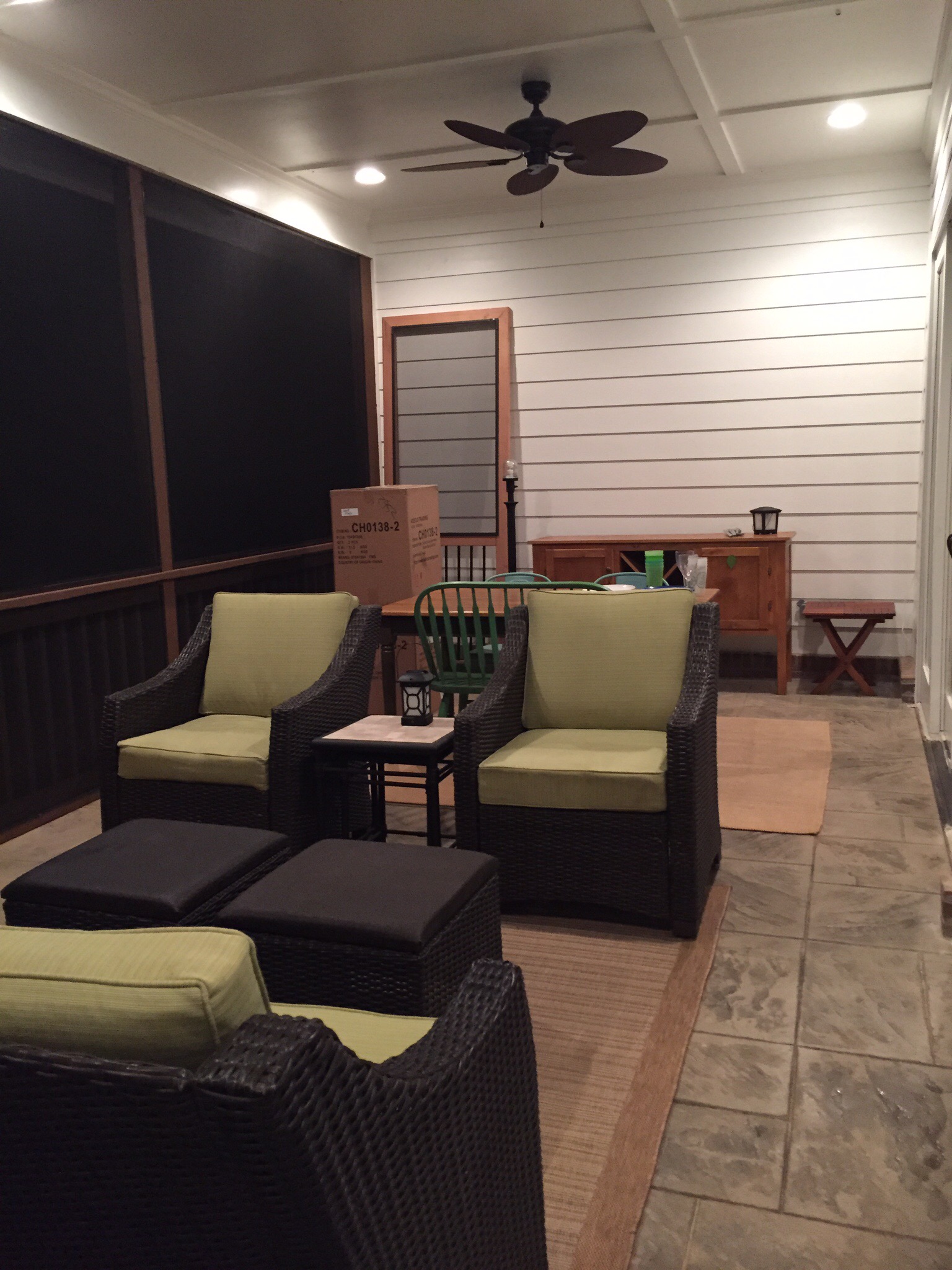 The screened porch on Saturday night after moving in.

It was a few days before they came to get this guy. Good bye, old friend…..

You might thinking having a C.O. and moving in means no more construction. Nah, that’s not how we roll. This was was the scene on the driveway and in the yard today.

The city was gracious in allowing our C.O. with just straw down because it was too wet to lay sod.  Here they’re removing the hay and smoothing it all out.  It’s going to dry further a couple of days before we get sod and the landscaping is completed.

These stones belong to our new neighbor. He took them up when he added a new deck and we plan to use them as stepping stones. Recycling again. 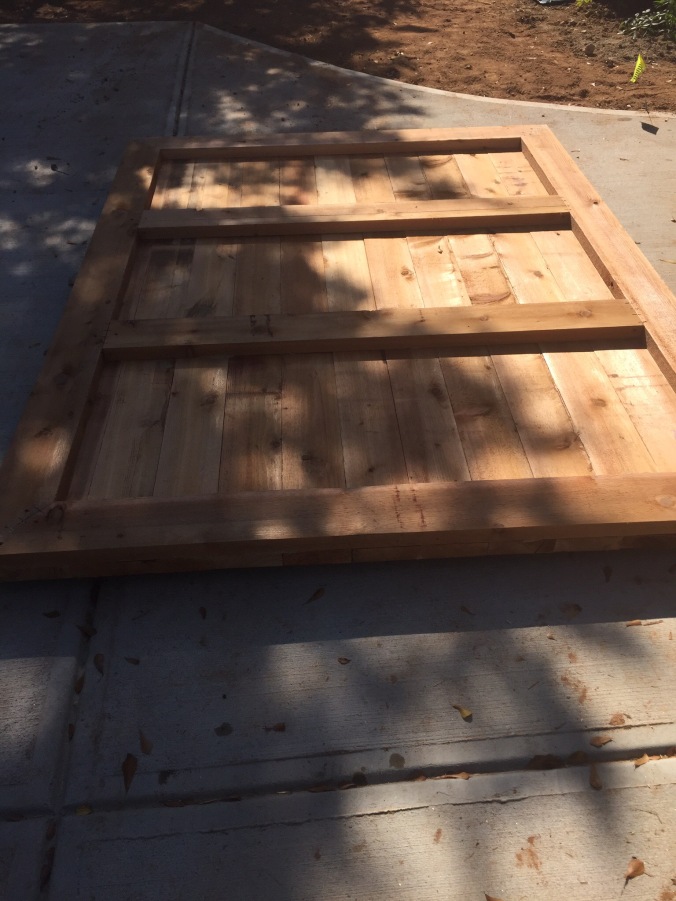 Oops….. The pedestal sink in the powder room was too close to the door and is in the process of being moved over.

The first night we came home after dark I thought the house looked so pretty lit up.  So, maybe all the shutters hadn’t been hung, but it was still pretty.  By this time next week the landscaping should be finished, the pedestal sink moved and the new shed doors hung.  With a little luck I can post “Construction Complete” very soon!

Last night I made the most delicious meal, I just had to post it. Now, as you probably know, I’ve been on a health kick lately. I’m trying to lose weight and I started out calorie counting, but since I’m already a pretty healthy eater, that really just helped me with portion control. Now that I have the hang of that again, I’m focusing more on what those calories are END_OF_DOCUMENT_TOKEN_TO_BE_REPLACED

It’s not that I haven’t wanted to share progress on the house, but I have become pretty hands-on and involved in the project, and that seems to be taking so much of my time that I have neglected to update here. END_OF_DOCUMENT_TOKEN_TO_BE_REPLACED

If you saw my smoothie post a few weeks ago, you know that I have been on a bit of a diet lately. Part of this diet is eating a bigger breakfast so that I can wait until later to eat a light lunch and later to eat a normal dinner. Well, those smoothies are fantastic, but I’m a little smoothie’d out. My first couple weeks of my diet was all fruits and veggies, the healthiest of the healthiest, but I needed something savory! So I present to you Grab-and-Go Greek Egg Cups: END_OF_DOCUMENT_TOKEN_TO_BE_REPLACED

This past weekend, Mom and I took a little “staycation” in Midtown Atlanta and had a blast! Why midtown Atlanta? The Atlanta Beltline Lantern Parade!

If you’re not from Atlanta, you may be wondering “What is the Beltline?” END_OF_DOCUMENT_TOKEN_TO_BE_REPLACED

Brown butter. Is there anything more delicious and flavorful than brown butter? I swear that shit is good on just about anything. Despite using it on this fish, the meal was still light, fresh, and low-calorie, which is what I’m after these days! This meal also took less than 30 minutes to make from start to finish… you can’t beat that! END_OF_DOCUMENT_TOKEN_TO_BE_REPLACED

We had a great trip to Santa Fe.  What a fun little city! We took lots of pictures and I’ll do a post on the trip soon. On returning we were excited to see siding on the house!

And….. The floor of the screened porch was begun. This is new territory for us. We’re using a stamped concrete application. It’s a compromise between plain old concrete and a pricey stone floor. You pick a color that gets mixed into the concrete before it’s poured and then stamped with your chosen design. Then a “release” color is applied. In our case it was in a powder form and sat on the concrete a few days being absorbed. Read along and you’ll see the finished product. END_OF_DOCUMENT_TOKEN_TO_BE_REPLACED

Whew! I have been neglecting this blog lately! But I’m back and I’m in action… my birthday was a couple weeks ago and my fantastic roommate got me an Oster MyBlend Blender, which you can find details on here. It was really the perfect thing because with the help of gift cards from my parents and 3 wonderful friends, I also got a FitBit! END_OF_DOCUMENT_TOKEN_TO_BE_REPLACED Join 987 other followers
Follow Biscuits and Burlap on WordPress.com

Blasts from the Past

A mother and daughter's take on decorating, crafting, cooking, and everything in between